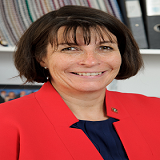 Professor Helen Cross is The Prince of Wales’s Chair of Childhood Epilepsy and Honorary Consultant in Paediatric Neurology at UCL-Great Ormond Street Institute of Child Health (as well as Head of the Developmental Neuroscience Programme), , London and Young Epilepsy, Lingfield, UK.

Her research has been targeted at improving outcomes in early onset epilepsy, specifically in assessing the role of surgery and ketogenic diet. She is Secretary General of the ILAE 2013-2017, (re-elected as Treasurer 2017-2013), Clinical Advisor to the National Children’s Epilepsy Surgery Service, Chair of the BPNA Research Committee, Chair of the Neurosciences Clinical Study Group of the Clinical Research Network (Children) and coordinator of the recently approved European Reference Network for rare and complex epilepsies, EpiCARE. She holds NIHR Senior Investigator status 2016-2020. She was awarded an OBE in the Queens Birthday Honours in 2015.